My Message to those Upset About Saraki and Dogara 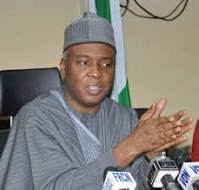 I have often opined that many Nigerians are politically naive. This position seems justified with the reactions of many people to the emergence of Senator Bukola Saraki as Senate President and Yakubu Dogara as the Slllpeaker of the House of Representatives.

What are the important issues here? The first thing is to consider is: what are the requirements for election into these 2 offices? The requirement is simply that senators-elect vote for their leaders, members-elect of the House of Representatives vote their leaders into office. Party and regional considerations are only extraneous variables that the process does not depend on.

In strengthening our institutions, we must allow them evolve within the constitutional framework and not prevent them from charting their course as long it is within the confines of our law.
Posted by Abdulkabir Olatunji at 6:44 AM