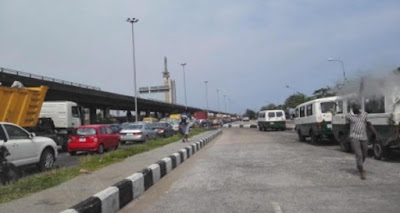 There are 3 Major bus stops on the Island: Obalende, Idumota and CMS. CMS is an acronym that means Christian Missionary Society (CMS) which was very active during Nigeria's colonial period and has a tall building on the Marina where the bus stop is located.

CMS is a convenient bus stop for many people commuting to Broad Street which is perhaps the most important street in Nigeria in terms of economic power with many banks having their corporate headquarters there with First Bank and United Bank for Africa being prime examples. It also very close to Victoria Island and by extension Ikoyi. People commuting to Lekki and Ajah which have become important urban centres in the last 20 years pass through CMS as well.

There are a lot sea-worthy and abandoned vessels along the Marina and you can see them around CMS which also serves as a jetty for ferries which transport commuters to and from places like Ikorodu, Oworonsoki and Badagry. Sea travel is still in its infancy in Nigeria because of poor funding and safety issues. However, there are still thousands of people that access the Island by ferries that berth at CMS every week.

CMS is also a major hub for the Bus Rapid Transit (BRT) service in Lagos and it extends to Victoria Island from there.

There's usually heavy traffic at CMS in the morning because of the indiscriminate parking of Lagos yellow buses known as 'Danfos' and the rush of many workers to get to work on time.

There are many formal and informal commercial enterprises as well as traders located at CMS like the popular CMS bookshop which stocks Christian and secular books. However, it is not as big a market as Idumota or Obalende are.

Almost every part of Lagos can be accessed by bus from CMS but you might have to ask where to board the bus heading to your destination because of the different parks they operate from.

CMS and the Marina axis is well-lit at night and has some level of activity at every hour; day or night. However, hoodlums have been reported to take advantage of the early morning traffic to rob drivers in traffic, threatening to smash windows if they don't willingly hand over their valuables.

CMS is a bus stop most visitors to the Island will pass through and it is also very important for a large number of the millions that commute to the Island every day for work or trade.

Last but not least is the fact that the Lagos State Government Governor's official residence at Marina is a stone throw from CMS. It is one of the most historic and popular bus stops in Lagos, you should see it if you are visiting.
Posted by Abdulkabir Olatunji at 8:56 AM