Could Muslims Have Played Major Roles in the American War of Independence? 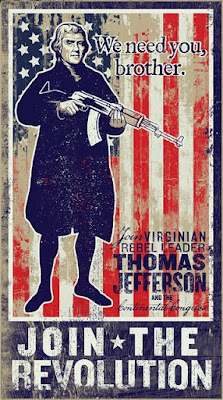 Ok, Donald Trump has managed to steal the headlines with the his "banning Muslims from America" proposal. However, what many Americans don't know is that Islam has always had a strong influence on America; from the study of Islam and the Qur'an by Thomas Jefferson, principal author of the Declaration of Independence; who was elected the second Vice President of the United States and the third President.

Going further, what if Muslims actively took part in the quintessential demonstration of the 'American spirit' embodied in the fight against British colonialism called the American War of Independence? What would it mean for America, its relationship with Islam and Muslims?

It turns out this might be the case if you go by the following excerpt from the Mail & Guardian's feature –The Muslims who shaped America:

Muslims were part of the US from its very beginnings. Among those who served under the command of chief of the continental army, General George Washington, in the war against British colonialism were Bampett Muhammad, who fought for the Virginia Line between the years 1775 and 1783, and Yusuf Ben Ali, who was a North African Arab.

Some have claimed that Peter Buckminster, who fired the gun that killed British Major General John Pitcairn at the battle of Bunker Hill and later went on to serve in the Battle of Saratoga and the battle of Stony Point, was a Muslim American. This may be so, but the chief ground for the claim is that Buckminster later changed his surname to Salem or Salaam, the Arabic word for peace.

But clearly Washington, later America’s first president, didn’t have a problem with Muslims serving in his army. By giving these Muslims the honour of serving America, Washington made it clear that a person did not have to be of a certain religion or have a particular ethnic background to be an American patriot. Trump seems to want to overturn that venerable American principle.

The largely Muslim kingdom of Morocco, incidentally, was the first country to recognise the US. In 1786, the two countries signed a treaty of peace and friendship that is still in effect today, the longest unbroken treaty of its kind in history."

It seems to me that the only reason Donald Trump can pull the "ban Muslims from America stunt" is that America has lost focus and a clear sense of identity which is evident by the collective amnesia of its people and its history.

The fact is: Islam is not new to America and is not likely to leave it any time soon.

Posted by Abdulkabir Olatunji at 4:17 AM