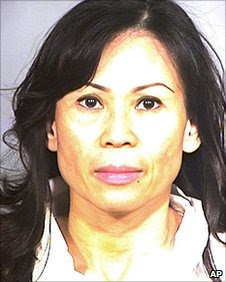 It is almost unbelievable but it's true! Catherine Kieu Becker, 48, is said to have drugged her husband's meal, tied him to a bed after he went to sleep feeling unwell, went ahead to cut his penis with a knife and then called the Police telling them what she had done and said he 'deserved it'.
Lt Jeff Nightengale, of Garden Grove police, near Los Angelis California said the two are going through a divorce. The unnamed husband (I assume we can call him Mr. Becker) was rushed to the hospital after police arrived at the couple's home and found him tied to the bed and bleeding in the groin area.
Mrs. Becker is said to have tossed "her husbands most prized asset" into the garbage disposal and turned it to the 'on' position (she must of have really wanted to get rid of it badly).
She was arrested on suspicion of aggravated mayhem, false imprisonment, assault with a deadly weapon, administering a drug with intent to commit a felony, poisoning and spousal abuse.

On Wednesday, this week, she was charged to court with torture, bodily injury with a knife and aggravated mayhem - a felony that involves depriving a victim of "a limb, organ, or member of his or her body".

If convicted on all charges she faces life in jail, said the Orange County District Attorney's office after the alleged attack on Monday.

Posted by Abdulkabir Olatunji at 6:36 AM