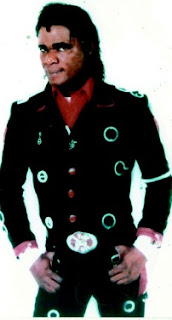 I do not know how to describe this guy other than to compare his looks to that of some of the zombies in "The Thriller" video. He is Michael Eze and he introduces himself thus:

"The death of Michael Jackson made the pop star walko chilko an instant celebrity. i became the biggest news on print media for been the only Michael Jackson look alike in the world. 48news papers and magazines around the world in one year head line in japan and London . i was escorted by PMAN to welcome mallon Jackson at the airport on his arrival to Nigeria, mallon promised to show me michaels grave in los Angelse and the white paid money to have a photo shot with me. now am the worlds biggest image . for more info or spons, advert, you can call on this number 2347040334154 thanks my number2348055969614."

Having introduced you to this "Naija Michael Jackson" I leave you to make-up your mind on what you think about him.
Posted by Abdulkabir Olatunji at 7:46 AM