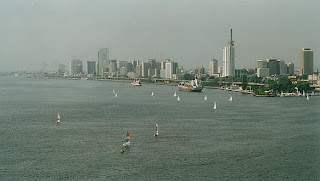 On Wednesday, August 24, 2011. Governor Babatunde Raji Fashola signed the controversial Tenancy Bill into law in Lagos State. The law now regulates transactions between landlords and tenants in Lagos covering different aspects of their relationship. The key part of the law that has virtually everybody talking about it is the section that states: "It shall be unlawful for a landlord or his agent to demand or receive from a sitting tenant rent in excess of six (6) months (one year in the case of a new tenant) in respect of any premises." In effect, a landlord cannot collect more than a year's rent from a new tenant and cannot collect more than 6 months rent from a sitting tenant. The state attorney general, Ade Ipaye said defaulters "shall be liable to a fine of N100,000 or three months imprisonment."

Personally, I do not want to get into the argument about the advantages or disadvantages of the bill. I am more interested in the fact that the Tenancy Law does not apply in some high-brow areas of Lagos State viz. Ikoyi, Victoria Island, Ikeja GRA and Apapa. The first question that comes to my mind is: What kind of segregation is this?

Now, some may argue that the Lagos State Government charges higher rates for these areas in terms of Land Use Charge and other property levies and taxes. I would counter that by saying the higher rates are based on the higher valuation of property in these locations.

By incorporating this kind of segregation into the Tenancy Law, Governor Fashola seems to be confirming George Orwell's assertion that "All animals are equal but some are more equal than others"in his classic novel- Animal Farm. Well, I would also like to remind Governor Fashola that there is also a saying that goes thus: "What's good for the goose is good for the gander."

The Governor cannot expect that some people will be sent to jail for breaking a particular law and other citizen's within the same state will not be bound by it at all. This makes the law defective in my opinion- in fact it is unethical and immoral.

The excuse that has been given to justify the inherent segregation in the Lagos State Tenancy Law is that people living in areas outside of Ikoyi, Victoria Island, Ikeja GRA and Apapa are the ones that are exploited the most and as such need more protection; so in essence if you live in this four locations in Lagos and you are exploited- you are on your own.

This could be just the beginning of other forms of legislated segregation; there could soon be a separate law for public servants and another for those that work in the private sector. In fact, I would venture to suggest that the the residents of Ikoyi, Victoria Island, Ikeja GRA and Apapa should seek to create their own separate state since no-less a person than the Governor of Lagos State thinks they are different from other residents of the state.

Whilst I am not trying to ridicule the efforts of the Governor to curb the exploitation of tenants in Lagos State, I think it is absolutely absurd that the new Tenancy Law does not cover every inch of Lagos State. This is against the natural concept of Justice and seems like a disincetive to be poor or not to be super-rich enough to build/live in Ikoyi, Victoria Island, Ikeja GRA and Apapa. I don't think anybody has a right to condemn people that seek the short-cut to prosperity when the government itself is now making separate laws for the super-rich.

The Lagos State Tenancy Law as it currently stands is in bad taste and should be challenged in court because I believe it may be illegal in the first place thereby making its provisions null and void.
Posted by Abdulkabir Olatunji at 1:22 AM