Well this is not a surprise if finally confirmed... 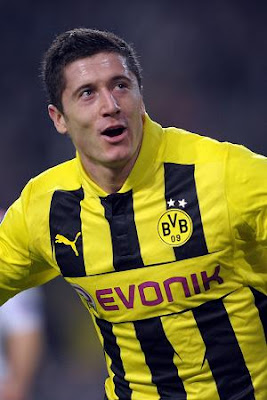 According to Jupp Heynckes’ agent, Enrique Reyes, Bayern Munich have a deal in place, for Robert Lewandoski from Borussia Dortmund this summer.

On Tuesday, the Bavarians confirmed that they would be triggering Mario Gotze’s release clause of around €37 million, for him to move to the Allianz Arena.

Reyes has now revealed that his team mate will also follow him to their Bundesliga rivals.

“Yes, right now, they have Lewandowski and Gotze. The problem is that Bayern have a lot of money. They are doing what they did with [former Athletic Bilbao midfielder] Javi Martinez.

“If a club don’t want to negotiate with you, what do you do? Why, pay the buy-out clause, of course.”

Posted by Abdulkabir Olatunji at 1:45 AM