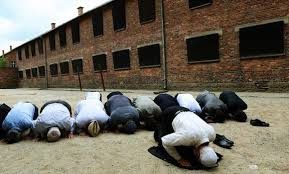 Muslim leaders pray at Auschwitz during a Holocaust awareness visit

Muslim leaders from across the globe knelt in prayer for the Holocaust dead at the Auschwitz’s notorious Wall of Death on Wednesday, in an emotional visit to the Nazi German death camp in southern Poland.

Thousands of Auschwitz prisoners perished at the wall, which is grey and still riddled with bullet holes. It is a stone’s throw from the infamous wrought iron “Arbeit macht frei” (Work makes you free) gate at the camp’s entrance.

“What can you say? You’re speechless. What you have seen is beyond human imagination,” a visibly moved Imam Mohamed Magid, President of the Islamic Society of North America (ISNA), told AFP after prayers and viewing the camp’s infamous gas chamber and crematoria.

“When I saw what happened for the people here, I tried to prevent my tears from my eyes because its very difficult to see how many people were killed without any reason,” Palestinian Imam Barakat Hasan from Ramallah said.

“I am from Palestine and my people are suffering now since 65 years until now, so of course I feel for others who have suffering,” he added.

The visit was part of a Holocaust awareness and anti-genocide programme organised in part by the US State Department’s Office of International Religious Freedom.

Of the six million Jews killed by the Nazis during World War II, a million were murdered at Auschwitz-Birkenau, mostly in its notorious gas chambers, along with tens of thousands of others including Poles, Roma and Soviet prisoners of war.

Posted by Abdulkabir Olatunji at 3:16 AM