This does call to question building standards and the need to review them regularly... 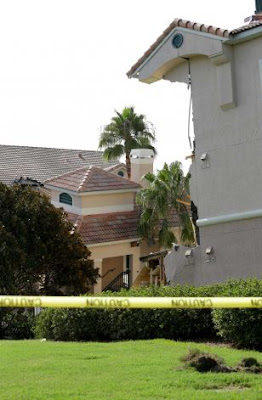 
A sinkhole has caused a section of a Florida resort villa near Disney World to partially collapse, while another section of the villa is sinking, authorities say.

About 30 per cent of the three-storey structure collapsed before dawn on Monday, Lake County Fire Rescue Battalion Chief Tony Cuellar said. The villa at the Summer Bay Resort had been evacuated, and no injuries were reported.

Cuellar said authorities were also concerned about another sinking section of the villa.

The sinkhole was about 12 to 15 metres in diameter, Cuellar said.

The villa houses 24 units, and about 20 people were staying in it, Cuellar said.

Authorities were called to the scene, about 16 kilometres west of Disney World, late on Sunday and found that the building was making popping sounds and windows were breaking.

In an interview aired on ABC's Good Morning America, Maggie Ghamry, a guest at the resort, said that when she first heard the noises, she thought it might be kids running down the hall.

A large crack was visible at the building's base.

Luis Perez, who was staying at a villa near the sinking one, said he was in his room when the lights went off around 11.30pm on Sunday (1330 AEST Monday). He said he was on his way to the front desk to report the outage when he saw firefighters and police outside.

Florida has a long problem with sinkholes, which cause millions of dollars in damage annually. On March 1, a sinkhole underneath a house swallowed a man who was in his bed. His body was never recovered.

Source: SBS
Posted by Abdulkabir Olatunji at 3:46 AM

You can contact us for adverts or consulting on online marketing, social media campaigns, business management and technology by sending an email to [email protected]m or call +2348085404500 (08085404500 if you are in Nigeria).