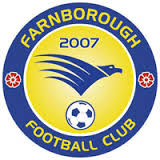 Lionel Messi, Pelé and Franz Beckenbauer will line up for Skrill Conference South side Farnborough FC this Saturday, as they prepare to take on Chelmsford City in their season opener.


But all is not as it seems. An outlandish sponsorship deal brokered by bookmakers Paddy Power - which salvaged the administration-plagued club - has seen Farnborough players change their names by deed poll to that of legendary footballers who grace their respective positions.

The ‘Boro’ faithful will turn up to Paddy Power Park on Saturday afternoon expecting to see fan-favorites Doyle, Inns and Treacher. Instead they will be entertained by the likes of Gascoigne, Best and Banks, who will be heeding the tactical advice of their very own ‘Special One’.

Farnborough manager José Mourinho (previously Spencer Day) said: “Over the summer it looked touch and go whether we’d even start the season, but now we’ve got by far the greatest team the world has ever seen. Although it’s not all good news, Pelé and Maradona have almost come to blows over who gets to wear the number 10.”

Source: London Evening Standard
Posted by Abdulkabir Olatunji at 6:50 AM